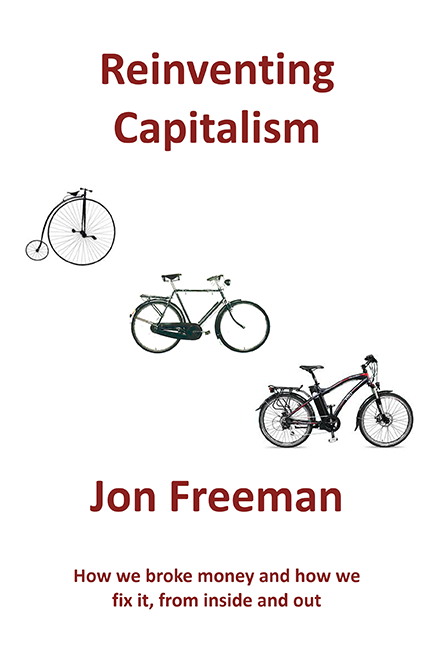 Our financial systems are broken - not fit for purpose.  The evolution of capitalism has stalled and no longer meets our human needs or the conditions that we face.  When we examine how our relationship with money has evolved, we can see how the values and mind-sets we held have become embedded in systems that are now poorly adapted to today's world. This book describes what is required now of the system and we who use it, in order to enable its redesign and rebuild. Our economic values, relationships and systems operate at several levels. They drive individual views and actions. They show up in our societal choices and political priorities. Our businesses and corporations function according to our perceptions of how ownership, engagement, commitment, benefit and purpose should be framed and governed.

Reinventing Capitalism is not a technical book and its themes are presented in everyday terms that we can all understand. Nor is this an exercise in theory. Its only function is to help us solve today's problems - to see how we find our way to stability, sustainability, fairness and functionality. Money was invented as a tool to serve us; now it drives our choices and decisions and has become 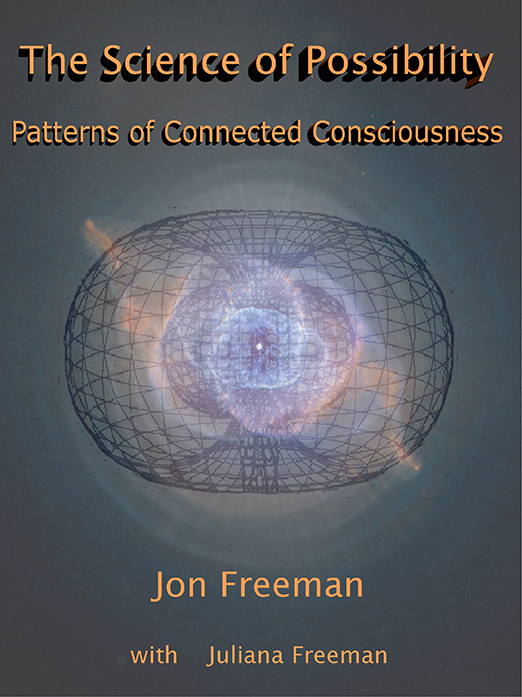 “The Science of Possibility” offers a radical perspective uniting science with spiritual experience and non-ordinary views of reality. It provides a comprehensive view through physics, biology, genetics, evolution, psychology and human experience. The result is a connected web that lays clear the patterns connecting consciousness to material existence. It reveals the non-ordinary reality of intuition, spiritual experience and alternative medicine as not just experience created by human minds, but as the ground base of reality that underpins and defines material existence. Everything that universe consists of rests in patterns of relationship. All that we are lives in and influences those patterns. This is the source of our potential and possibility.

Science of Possibility on Amazon

I just wanted to send you a note to say that I have been enjoying your book. Thank you for sending it. I see we have much to discuss... we need a long afternoon someday... it is a beautiful work you have done.

If you have not read Jon Freeman's new book I strongly suggest you do so. He will open your eyes to expanding notions of reality."

As brave and as comprehensive an attempt as I have

How do we support ourselves and our clients through these most challenging times?

As a coach, facilitator or witness of another’s developmental journey it is a primary skill or capacity to navigate these turbulent times and waves and enable others to do likewise with skill & awareness.

Our intention with this event is to facilitate a deep exploration of human development driven by the living systems intelligence of Spiral Dynamics & drawing on the experience and wisdom of participants.

We seek greater embodiment. Deeper roots in our early stages and increased fluidity above

Over recent centuries, humanity has increasingly believed in the power of reason and the dominance of the analytical mind.  It has relished the success of technology and the illusion of mastery over the material world.  Two large and visible flaws have become apparent:

1) We have neglected the Beige, Purple and Red systems.

The dominance of the mind has diminished our respect for our somatic systems and intuitive knowing, reducing our sense of connectedness to nature and each

A three-day training in the deeper theory, experience and practice of SDi.  Led by Jon Freeman and Rachel Castagne.

What is the next step in improving our organisations and leaders?

What are the fundamental drivers for human change?

What is our world requiring of people and organisations?

How do we support the emergence of what’s next?

What approach to organisations is needed from Spiral Dynamics practitioners as we enter more visibly into the conditions that Clare Graves predicted as Western society enters the Life Conditions for Tier 2? What should we be bringing to this work arising from perspectives and ways of thinking that have emerged in the last 20 years?

In the world beyond SD there have been progressive shifts in academic approach over the past decades, tussling with complexity and unpredictability. They have been pointing the way towards new approaches without quite finding the “simplicity that emerges the other side of complexity”.

Spiral Dynamics was ahead of its time. It did not get entirely caught in the conventional view of scientific, academic and intellectual validity, based on a mythology of objective rigour. Benefiting from Gravesian insights and its understanding of the stage-related views that people within organisations would have of their world, SD was able to recognise that subjective perceptions would make a systemic difference to organisational function.

Biology and Embodiment in Spiral Dynamics

In the development of Gravesian/Spiral Dynamics (SD) theory, Graves (1974) coined the term “biopsychosocial” to indicate that both interior and exterior influences are shapers of human development. Subsequent explorations of the theory have emphasised the psychological and

sociological aspect; the body has been somewhat absent from the picture. This article will explore and potentially adjust that balance.

It is inevitable that our theoretical focus has been towards the later developmental stages. The effects of Blue, Orange and Green ways of thinking are highly visible in both individuals and societal groups. They are the most recent to have emerged in our Western history.

In contrast, it is now almost impossible to find an existing group of humans that would resemble the earliest, Beige clans. In order to talk of Beige in terms of any living adults, we are required to look at those in traumatic situations or at the elderly and infirm, which is to say at those who have occupied later values stages but who are now regressing. This does not give us a model of healthy Beige.

We do not fare much better with Purple. Numbers are small and few groups are uncontaminated by their contact with the newer

Awakening a new narrative: Finding the energy for culture shift

The conversations across today’s world are failing to provide solutions to the multiple known problems, with the effect that we witness a continuous down-shift in the people’s responses. There is more fear and anxiety which shows up at the personal level in unhealthy coping strategies and at the socio-political level in regressive and toxic populism. This is not to say that the solutions are not visible; in many cases they are. But they are fragmented and piecemeal and even in their individual areas of focus, the will, vision, energy and capacity to implement them are failing to break through.

If we were to look at our situation from a Graves and SD change states model we might describe the world as being in high Beta stress and Gamma trap conditions. We might also consider that among the Change variations options it is partly in CV4 down-stretch and regress to cope, and partly in CV5 up-stretch or progress to deal. If we take it as implicit that the “momentous leap” is inevitably calling for 2nd order change, it becomes obvious that

The Dawn of Coral

I have been thinking about this for a long time. I have no research beyond my observations of what I believe I am seeing at what I think of as the leading edge of human development and what maybe resonates a little in my own explorations.

I have voiced a little of this before, though I am very hesitant to do so since we have not yet established a strong Yellow in the world, still less a base of Turquoise. Therefore the limiting life conditions which might generate the dissonance to produce Coral are not clearly identifiable. With that caveat, and an attempt to follow the Graves mode and its trajectory with some consistency, here goes.

Yellow sees the systemic needs of the human world, integrates first tier stages, reshapes them so that they have more upward-supporting versions of their priorities (e.g. an agile Blue that supports Orange and Green as well as containing Red) and encourages flexibility, health and balance into the global meme-stack. Its limitations are, that it is excessively human-centric (the “I” of the species) and propelled by the species need to survive. It remains constrained by its belief in an outdated, fragmented, transactional, material, Orange scientific